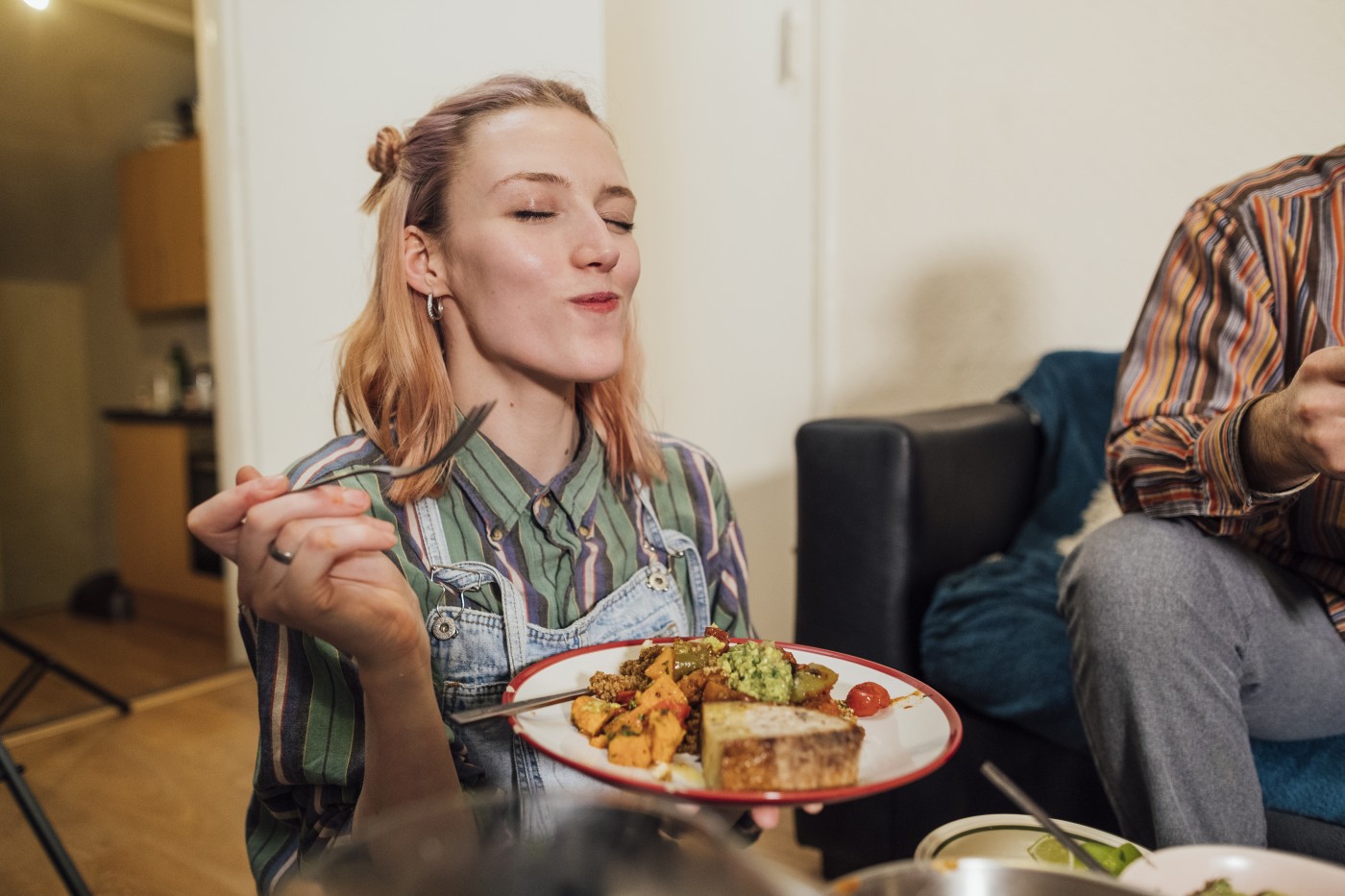 Carolina Sampaio Lechner
VisualGPS
Fresh, green, healthy. This is what popular visuals of vegan food look like, for our Food & Beverage industry customers. Although the typically‑shown salads, shakes, soups and bowls might look tasty, it’s worth asking… are they also fun? And does it even matter?

World events like climate change and the Covid pandemic are changing the way we relate to food. Our VisualGPS research shows that 48% of Europeans say they consciously choose to eat and buy food that is good and sustainable for the planet. Indeed, environmental concern and animal welfare are key motivators for people to avoid animal sourced products like meat and dairy, but concerns about personal health1 are growing in importance — for some, this was motivated by the Covid pandemic.2 According to Euromonitor, in 2021, over 3% of Europeans were fully vegan, while 11% identified as flexitarians, and 23% claimed to having limited their meat intake beyond Veganuary, helping drive the plant‑based boom.3 According to the organisation, which “encourages people to try veganism in January and beyond,” this year’s campaign has counted the most participants4 since its beginning in 2014.5
Adding the (metaphorical) spice to plant‑based food
Despite sustainability and health aspirations influencing what people eat, the consumption conundrum7 does not make an exception for food: 52% of respondents in Europe find it hard to make environmentally responsible food choices, so they sometimes buy what they want. Why this matters? It shows how consumers don’t always make the choices they think they should, to the point of, e.g., price and taste overruling concerns about the environment.8, 9 After all, as our VisualGPS research shows, 46% of Europeans say that due to the experiences of the past years, they think everyone should indulge in activities that make them happy, and 84% look for ways to celebrate the good things in their lives. As we can see, consumers are now looking for fun and enjoyment. Food producers are jumping on the bandwagon and adding plant‑based sweets such as dairy‑free ice creams to their portfolio, allowing consumers to indulge with a clear(er) conscience.10 On the savoury side, Burger King Austria is making the plant‑based option the standard one by asking customers if they want their burger “normal or with meat”.11 In Germany, the sausage manufacturer Rügenwalder Mühle sold more vegetarian and vegan substitute products than the “actual thing” in 2021.12 The UK, however, is the one leading the way in Europe in terms of vegan food launches13 with products such as “cheeze” dips, seaweed crisps, or raspberry & pink pepper flavoured vegan chocolate.14

So, when telling visual stories of plant‑based food consumption, make vegan food the exciting, or comforting choice, besides “just” the (mostly) healthy one. Consider expanding the visual plant‑based menu and adding permissiveness by including sweet and savoury treats. Additionally, think about the origin of the food you are portraying. Currently, some ethnic diversity is represented in popular food visuals, showing dishes or plant‑based adaptations of foreign cuisines such as Middle‑Eastern and Mexican, but visuals lack the cultural context they come from. Finally, reflect on how consumers want to feel when eating, and show in their facial expressions how they enjoy and indulge in their (plant‑based) food choices.
It’s also about accessibility
The pandemic did not only influence what we want to eat, but also how we want to prepare it. With people being forced to cook and eat at home at first, and many continuing to do so as they now work from home, convenience has become a higher priority.15 Plant‑based products sold in retail stores speak to this need; however, popular visuals of vegan food often tell another story, showing towers of fresh vegetables waiting to be chopped, sautéed, baked, or preserved. When visualising vegan food preparation, think about the simplicity and convenience people are looking for. Show how it does not take too much effort and ingredients to cook a plant‑based meal. Consider including alternatives to cooking, such as ordering in, having plant‑based street‑food, or eating in vegan restaurants. After all, 68% and 82% of European consumers surveyed in our consumer survey said they are comfortable eating inside or outside in a restaurant, respectively.
Socialising the plant‑based diet
Eating out is indeed a pattern observed in popular food visuals, which are moving away from full‑on hosted dinners around the table to more dynamic scenarios inside and outside the home. They show people eating by the kitchen counter, on the go, in‑between, during work – but often, having a meal by themselves, especially in home scenarios. This also applies for visuals of plant‑based meals. However, as a study carried out by the University of Oxford shows, “social eating” benefits our wellbeing and mental health.16 Even in 2020, we did virtual cooking sessions with colleagues and friends, or brought them on a tablet – the digital one – to our dining table, as a way of keeping our bond with them during a time when we could not do this otherwise.

So, why not include “social eating” visuals in storytelling about vegan food? Consider showing how people bond over plant‑based food, as they cook and eat together, or even share a meal. Think about including a variety of scenarios at home hosting vegan dinners or barbecues, having vegan street or restaurant food, or in nature at a picnic.